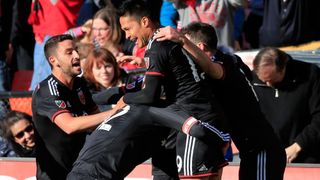 Miguel Aguilar, Kofi Opare and Conor Doyle were all on target in Washington as DC made it two victories from as many matches in CONCACAF's showpiece club competition.

MLS high-flyers United hit the crossbar twice before they opened the scoring in the 37th minute via Aguilar, who tucked the ball through the legs of Montego Bay goalkeeper Jacomeno Barrett on Tuesday.

The capital club doubled their lead with 19 minutes remaining when Opare used his outstretched right boot to put the hosts in control.

Substitute Doyle completed the scoring in the dying stages after placing the ball beyond Barrett.

Winless Jamaican side Montego Bay are rooted to the bottom and poised for elimination after two games.

Deportivo Saprissa came from behind as they defeated Mexico's Santos Laguna 2-1 for back-to-back Group A wins.

Saprissa trailed Javier Orozco's 20th-minute opener until Marvin Angulo levelled proceedings 10 minutes into the second half after cheekily placing his free-kick under the wall.

The Costa Rican hosts completed their comeback 12 minutes from time when Nestor Araujo put the ball into his own net.

Saprissa are three points ahead of Santos Laguna in the table.

Meanwhile, Municipal registered their first win in Group G thanks to a late 2-1 victory at home to Santa Tecla.

Carlos Ruiz was the hero for the Guatemalan side after converting an 86th-minute penalty.

Municipal top the table with four points, one more than Real Salt Lake, who have played two games less.