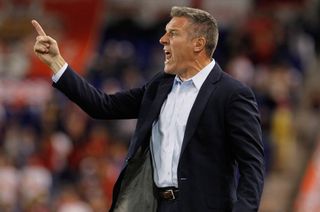 Sporting's manager Peter Vermes has guided his team to the top of the MLS Eastern Conference after 24 matches.

Their latest league outing ended in a comprehensive 4-1 victory over Toronto FC at Sporting Park, with top scorer Dominic Dwyer bagging twice from the penalty spot.

The focus now switches to continental competition, as Sporting open their Group 2 campaign with a visit to Nicaragua to face Real Esteli - who drew their first match 1-1 with Deportivo Saprissa - at the Estadio Independencia.

"Everywhere we go we want to get three [points]," Vermes said in the aftermath of the Montreal victory. "Obviously all competitions have different scenarios you're going to be dealing with.

"The first key is we're playing away from home, so we have to be smart there. We've got to be careful not to give goals away, and at the same time, we have to try and capitalise on the mistakes they make."

Defending champions Cruz Azul - who won a record sixth title in April - will look for their first win in Group 6 having limped to a 1-1 draw with Alajuelense in their opening match.

Panamanian Clausura champions Chorrillo provide the opposition this time and they will look to make the most of home advantage against Liga MX's Clausura winners.

Also on Tuesday, America host Puerto Rican side Bayamon, while the Portland Timbers travel to Guyana to meet Alpha United.

DC United start their Champions League campaign on Wednesday, they too have impressed in the MLS Eastern Conference this term and sit second.

Up first for them is a meeting with Waterhouse of Jamaica, who were 2-1 winners over Tauro in their opening Group 4 fixture.

Montreal Impact too play on Wednesday, as they face a return fixture at FAS of El Salvador having won the first Group 3 match 1-0 earlier in August.