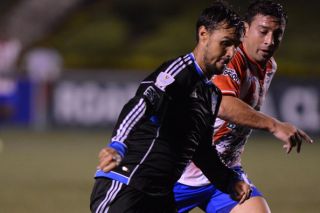 Chris Wondolowski's 62nd-minute goal saw the Earthquakes to a 1-0 win over Heredia at Buck Shaw Stadium.

The Earthquakes finished top of Group 5, which saw all teams – including the Montreal Impact – level on points.

Knowing a 1-0 win was enough, the Earthquakes held on in California, despite having Clarence Goodson sent off in stoppage time after he picked up a second yellow card.

Sporting Kansas City did what they needed to at home to Olimpia, playing out a 0-0 draw against the Honduran side.

It kept the MLS side top of Group 2 – a point ahead of Olimpia – and ensured they advanced to the quarter-finals.

Toluca progressed from Group 6 after hammering Guatemalan side Comunicaciones 5-1 at the Estadio Nemesio Diez.

Raul Nava and Edgar Benitez both scored braces for the Mexicans and Erbin Trejo netted the other goal in the comprehensive win.

Nava got on the end of a Gabriel Velasco pass to score just six minutes in and Benitez doubled the advantage midway through the half.

Jean Marquez pulled a goal back for the visitors on 55 minutes with a tremendous free-kick but their chances were ended soon after.

A clever run led to Trejo's goal before Benitez and Nava made it a thrashing.

Honduras' Victoria finished Group 7 without a point after slumping to a 4-1 loss at home to Firpo.

With both teams unable to qualify, El Salvadorian side Firpo scored three times in the final 22 minutes to clinch the easy win.