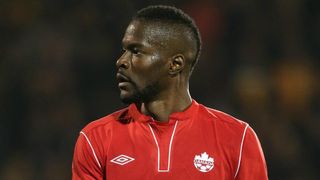 Canada powered their way into the third round of CONCACAF's World Cup qualifying, with a 6-0 aggregate victory over Dominica.

The North American nation enjoyed a 4-0 second-leg win over the Caribbean minnows, with Tesho Akindele's early goal setting them on their way at BMO Field in Toronto.

Akindele powered a shot from just outside the penalty area past Dominica custodian Glenson Prince in the fourth minute.

Cyle Larin buried a curling effort from a few yards further out than Akindele prior to half-time, before a Tosaint Ricketts brace in the second half sealed a comprehensive victory for Benito Floro's men.

El Salvador also struck early, as they advanced past St Kitts and Nevis 6-3 on aggregate.

Darwin Ceren's powerful second-minute strike in the second leg at San Salvador made progression tough on the visitors, who required at least two goals thereafter.

Nelson Bonilla added a second, and Arturo Alvarez made it 3-0 on the night and 5-2 on aggregate as Albert Roca's men were all-but through.

Atiba Harris pulled one back for St Kitts, but Bonilla's second completed the scoring.