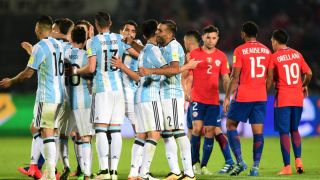 Argentina and Ecuador picked up important points in World Cup qualifying as the road to Russia continued on Thursday.

Argentina had to recover from going a goal down to beat Chile 2-1 in Santiago thanks to goals from Angel di Maria and Gabriel Mercado.

Gerardo Martino's side have struggled in qualifying thus far, but got their second win of the campaign, having won just one of their first four.

The win moves Argentina into the top four, although that could change when Brazil play Uruguay on Friday.

Ecuador remain top of the pile after a hard-fought 2-2 draw against Paraguay.

Enner Valencia got the home side off to the perfect start when he scored after 20 minutes, but a brace from Paraguay’s Dario Lezcano looked to have given the visitors their third win of the campaign.

However, a stoppage-time equaliser from Angel Mena secured a share of the spoils for Ecuador.

James Rodriguez and Carlos Bacca had the visitors 2-0 up after 41 minutes but a superb second-half comeback, including two goals in 12 minutes from Juan Acre and Alejandro Chumacero, levelled the scores.

But Cardona saved the day for Colombia with his stoppage-time winner.

Elsewhere, Peru and Venezuela played out a 2-2 draw.

Venezuela were 2-0 up after Romulo Otero and Mikel Villanueva scored the opening goals, before Paolo Guerrero and Raul Ruidiaz led Peru's response.