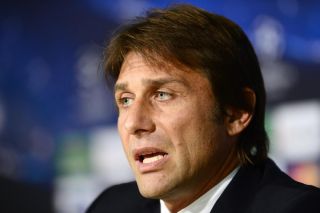 The Serie A champions slumped to their first loss of the season at the weekend, surrendering a two-goal lead before losing 4-2 to Fiorentina.

It is far from ideal form to take into a vital Champions League clash against Real Madrid, who have taken six points from their opening two Group B games.

While disappointed with his side's showing at the weekend, Conte knows they will respond against Madrid, a team he believes is among the very best in Europe.

"We respect Real Madrid because they're a very strong team," Conte said.

"(But) we shouldn't be afraid of them because you shouldn't fear anyone when you know that you've worked hard.

"Of course we respect them because we know that we'll be facing a team running for the title. In any case we'll enter the pitch aware of our skills and of what we can improve.

"We're going to the Bernabeu stadium with the aim of making a good performance. Of course we're aware that we'll be facing a very strong team.

"Those figures allow us to understand the level of the squad of Real Madrid. This can't be underestimated."

Conte has challenged his side to be brave and not be intimidated by Madrid's stars and is confident they have the game plan to get a result on Spanish soil.

"We studied Real Madrid and realised - even if we already knew it - the real strength of this team, which is devastating especially if you leave them any empty spaces," Conte said.

"We studied them and get ready under every point of view. We're aware that we'll be facing the best team in Europe.

"We have to make a good performance under the technical and tactical points of view and play in a structured way. We have to do our best and be brave.

"We know that there will be moments - maybe several moments - in which we'll surely suffer, but we'll have to try to attack as much as possible whenever we'll have the chance. I believe this may be the turning point of the match."

Juventus have managed just two draws in their opening two group matches and need a victory to close the gap on Real Madrid at the top of the standings.