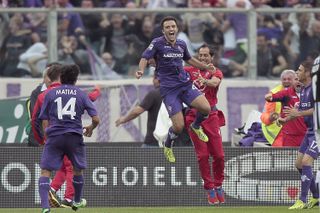 The Serie A champions went into Sunday's match unbeaten against Fiorentina at Stadio Artemio Franchi since 1998 and that run looked like it would continue as they went into half-time two goals up.

Carlos Tevez opened the scoring from the penalty spot before Paul Pogba pounced on a Juan Cuadrado error, but it was a completely different story after the break, with Giuseppe Rossi's own spot-kick sparking the comeback.

Rossi then fired in the equaliser from outside the area, which was soon followed by Joaquin's composed finish and the Italian forward’s third nine minutes from time, leaving Conte bemused.

He told Sky Sport Italia: "I think the game was practically closed. We were in control in every way, even in the second half and had some more great chances to add to our tally.

"Then something strange and unthinkable happened. We lost a match that we had been dominating. How do we explain it?

"In 10 minutes we destroyed all the hard work, both during and before the game. We managed to allow Fiorentina back into it and concede odd goals.

"This is football. We have to take these 10 nightmare minutes and learn from them. I continue to say this year will be very, very difficult.

"In these 10 minutes we did everything to help Fiorentina get back into the match, more than they had been at any stage. There are huge regrets.

"We struggled more last season and got a draw, whereas this time until the 70th minute it was all Juventus. This is football, nothing can be taken for granted."

With a UEFA Champions League tie against Real Madrid coming up on Wednesday, it had been suggested that Conte's men were more concentrated on that, but the 44-year-old did not feel that was the case.

He added: "This was an important game in a fiery atmosphere, so we could not be distracted by Real Madrid. We were in the match from the start and only went wrong in those 10 minutes.

"It has happened a few times this season that we’ve conceded chaotic goals. We have to work on it. That is all."