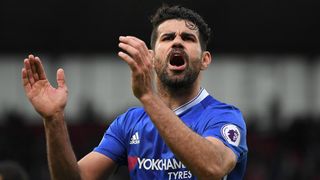 Antonio Conte is certain that Diego Costa remains focused on Chelsea's Premier League title race despite fresh reports linking him with a move to the Chinese Super League this week.

Costa's 19 goals in 32 games have been crucial in the Blues opening up a four-point lead with four games to play, although the Spain international has only scored five times since the turn of the year.

The striker's form dipped after a reported row with Conte amid rumours that Tianjin Quanjian wanted to sign the Spain international and the same CSL club were this week linked with a £76million move.

However, the Italian says he has seen no change in Costa's attitude on the training pitch and expects him to be at his best when Chelsea travel to Middlesbrough on Monday, by which time their lead at the top could be trimmed to one point, with Tottenham playing West Ham on Friday.

"The present is very important for us, now it is more important than the future to be focused, to be concentrated, to prepare in the right way for these five games [including the FA Cup final] from now until the end.

"But I'm not worried about this because I see my players every day and I'm seeing the right concentration, the right focus about them."

"For sure sometimes you can find it [is] true and a lot of time it's not true, but for sure in this part of the season it's normal.

"The most important thing is for us to be focused to try and do our job in the best way. The other situations are not important for anybody."