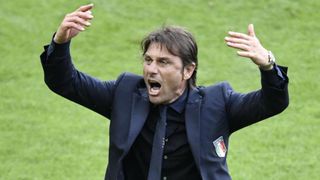 Antonio Conte claimed he had a lack of support as Italy coach after his reign came to an end with their Euro 2016 exit at the hands of Germany.

Italy fought valiantly in their quarter-final in Bordeaux but, following a 1-1 draw at the end of extra time, bowed out in an amazing penalty shoot-out that saw 18 kicks taken and seven missed.

Conte will now head for Chelsea but could not resist one final dig.

"I didn't see anyone alongside me, the media, or anyone, it was always Conte against everyone. I've always fought for the interests of the national team, not for myself," he said.

"If I'm honest I've never felt supported by anyone. The president of the Italian federation has always been alongside me but he can only do so much. My decision has been taken, it's a shame as we have created a family and I hope what we leave can bear fruit.

"I hope in the future we can give more time for the national side. I fought in vain to move the Coppa Italia final as I wanted to work with the players because our only chance of achieving something great, our only hope, was to work as a small war machine.

"I think we have proved that today, and throughout the European Championship.

"I hope that we can really leave a lasting mark in terms of love for the national team and for the shirt. We have tried to put this message across and I hope it's been conveyed despite our elimination."

Conte admitted he initially wanted to continue in the job but was excited by the upcoming challenge in England.

"I have had two wonderful years culminating in this eight-week period and I will never stop thanking everyone as we created a magical atmosphere which came to an end tonight," he added.

"The decision to leave the national team after a two-year spell was made before the tournament. In November I thought I was continuing, but when I made my decision not to continue with the national team I told the president my decision after which there was a great opportunity to move to Chelsea and I accepted that. Now I have the pleasure to begin this very exciting adventure.

"In a few days' time the new season will begin and, to be honest, I wouldn't like to have had a single day's holiday as that would have meant going forward in the European Championship.

"Now I'll take seven days off when I will try to shift some of this disappointment for going out of the competition before then taking the reins at Chelsea. I know it will be a difficult challenge but that's what I relish."

Conte was unable to take Italy to the semi-finals in France but said his players should be proud of their efforts.

He said: "I think Germany had huge respect for Italy - the fact the world champions changed their formation to play us showed that.

"I think the players have left a significant mark on this tournament and they've shown that with desire you can achieve things. It's a shame to go out in this fashion  but a top side goes through - I think they're the best side in the world in every aspect. The fact that we were able to match them should be a small achievement for us from a certain perspective but we believed we could do it.

"The disappointment in the dressing room was huge at the final whistle. We really believed in this dream, we scrapped to hang on to it but we know football can bring you joy and can leave a bad taste in the mouth. The players should go home in a relaxed way because they gave everything."