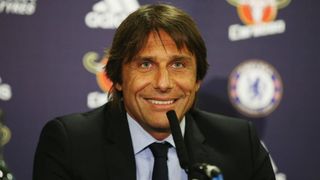 Chelsea manager Antonio Conte has expressed his delight at securing the services of N'Golo Kante.

The France international midfielder's switch from Premier League champions Leicester City to Stamford Bridge on a five-year deal was confirmed on Saturday, with the fee reported to be in the region of £32million.

Conte went on to oversee a 2-0 friendly defeat at Rapid Vienna in his first game at the helm but was still beaming afterwards over the prospect of working with his 25-year-old new recruit.

"I am very, very happy the club have bought this player," he told a post-match news conference at the Allianz Stadion. "He is a good player with good technique, fantastic stamina and I like this type of player.

"I think when you want to win you need these players - Kante, [Nemanja] Matic, who work hard for the team."

"Kante can give a lot to Chelsea to enforce and so on, [he can be] very important for us if we want to play with two central midfielders. He showed in last season he is able to play with another in midfield."

Conte, who will welcome new arrival Michy Batshuayi into his first-team group on Monday, is pleased with Chelsea's recruitment efforts during the early days of his tenure.

"I am very happy because together we are working to improve the squad. We know we have to improve but we prefer to wait and take the right player, rather than to go for a player with emotion that doesn’t adapt to our idea of football."

Goals from Joelinton and Tomi Correa ensured Conte's tenure got off to a losing start and the former Italy boss saw his players feeling the effects of three days of double training sessions but also, he believes, bearing the scars of last season's shambolic Premier League title defence.

"This first game for us, I know it was very difficult after three days of training double every day," he explained.

"The physical aspect, strength aspect - I think it is a bit normal to meet these difficulties in this game but I don’t like to lose and it is the same for my players.

"I think I saw some situations that I saw last season and I think this game is very important because we can learn a lot from this.

"It's important to switch our mind to change because the past is not important. The future is important. We must work for our present and our future."