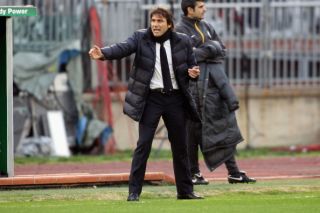 Juve fell behind on Sunday to Mauricio Pinilla's strike after 21 minutes - only the second goal Conte's men have conceded in 11 league games - but hit back in style through a Fernando Llorente brace, Claudio Marchisio's long-range effort and a tap-in from the impressive Stephan Lichtsteiner. It was Lichtsteiner who set up both of Llorente's goals.

The result keeps Juve eight points clear of Roma at the top of the table and beats a club record for successive wins that stretched back to 1932, something coach Conte was quick to pay tribute to.

He told Sky Sport Italia: "It's an extraordinary achievement, the fact in the history of Juventus - knowing the teams they had - never managed this before is amazing.

"The lads deserve applause, as football can go so quickly that you barely have time to enjoy these moments.

"Now we want to continue this positive streak, knowing full well there will be teams lined up to stop us."

Conte also reserved special praise for midfielder Marchisio, whose fierce strike after 73 minutes put Juve in front for the first time against Cagliari and opened the floodgates.

The Italy international has found a regular place in the Juve XI hard to come by this season and has reportedly attracted the attention of Manchester United. That speculation will intensify after United manager David Moyes was in Sardinia for the game.

But Conte spoke of Marchisio's "professional attitude", despite not being involved every week.

He told Sky Sport Italia: "Claudio is an important player for us and I must thank him for his professional attitude, he's a real champion.

"He has ended up on the bench this season but behaved like a great champion and has Juve in his heart.

"You can see he's in good shape and (on Sunday) I needed a change of pace in midfield, which he provided."

Lichtsteiner, meanwhile, believes that Juve could win the treble this season of the Serie A title, Coppa Italia and UEFA Europa League.

"Juventus need to go for all three competitions, we've got quality and an incredible team organisation. If we have belief, we could really manage it," he told the club's official website.

"We struggled after they went in front, then we grew in stature. We knew the goal would come sooner or later, and it did."