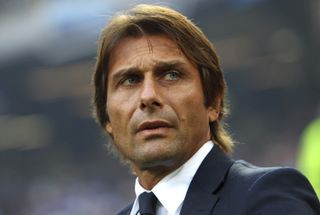 The champions edged the first half and probably should have taken the lead through Paul Pogba before substitute Mauro Icardi put Inter ahead in the 73rd minute.

But Arturo Vidal equalised within 120 seconds, to leave Conte heartened.

He told Sky Italia: "We played a good game against a team like Inter, who showed they will fight at the top (of the table).

"I liked our anger after going behind and we could have also got the second.

"Maybe in the first part of the second half we could have handled some situations better."

The Italian coach withdrew first-choice right-back Stephan Lichtsteiner at half-time, but Conte explained that he did not want to risk the defender getting sent off after he had already been shown a yellow card.

He added: "Why I replaced Lichtsteiner? For risk control. He had suffered a yellow card and risked getting a second.

"In these situations the experience of former footballer comes into play. I have waited until the 45th minute, but I was already thinking of the change in the 38th minute."

Conte picked the same starting XI for the third match in a row for the encounter, meaning that transfer-window arrival Fernando Llorente once again took a place on the bench.

And the coach admitted that the Spain striker is not yet fit enough to play from the beginning of a match following his signing from Athletic Bilbao.

"He is a part of the attack force," the 44-year-old said. "It is normal that having not played in the last few months he may be missing something in terms of rhythm and habit.

"I'll play him when I think that he will prove to be a good buy, not as a favour to you (the media)."