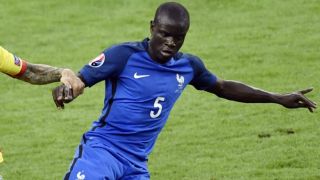 The France international midfielder left the Premier League champions for Chelsea on Saturday in a move that could reportedly reach a value of £32million.

After signing a five-year deal, Kante insisted he would never forget his time at Leicester, but said Conte's team were the most likely to match his personal ambitions.

The 25-year-old also reflected on a campaign which saw him make his France debut before going on to represent his nation as they reached the Euro 2016 final.

Kante wrote on Twitter: "The 2015-16 past season will remain as an important season for me as a football player.

"After a fantastic season, it ended with a final of Euro 2016 with the French national team. We lost, but we can be proud.

Conte: 'I want to say that Kante was a target, and for this reason I am very happy that the club have bought this player.' July 16, 2016

"Our team and the fervour of the French people have given us strength and I wanted to say THANK YOU ALL. Of course it has to be appreciated according to the attack that struck in Nice in July 14 and I have at this point a sincere thought for all the victims and their families.

"This season, I also discovered the Premier League championship with FC Leicester. I want to thank the leaders, my team-mates and Claudio Ranieri for this fantastic season that saw us winning the title of England. Their confidence and also the fans will forever remain in my memory. And I again thank you all.

"At the beginning of the 2016-17 new season, I chose to join Chelsea FC. It is a great club, which has just recruited a great coach and want to reach high ambitions I share.

"The club's project and the coach's speech have convinced me to join this new ambitious adventure.

"I am now waiting to see my new club and give everything for a successful summer… and season of course!!! We keep in touch!"