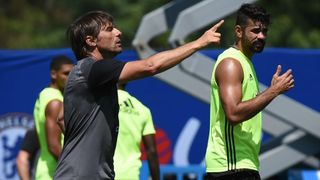 Chelsea head coach Antonio Conte admitted he is unsure whether striker Diego Costa will remain at the Premier League club when the transfer window closes.

Costa has been heavily linked with a return to Atletico Madrid, who have since signed Kevin Gameiro from Sevilla.

The 27-year-old Spain international's future remains uncertain after sitting out Saturday's 3-2 loss to Real Madrid in the International Champions Cup in Michigan.

"He didn't play because he was injured. If I see him improving in training he might play in the other games."

Pressed on Costa's future, Conte said: "This is a situation of the transfer market. I speak for today and today he is Chelsea's player.

"Tomorrow if you ask if Costa remains with us, I don't know."

"All 29 players are Chelsea's. After this period, I speak very clear with my club and there are players who will stay and the others will leave. This is football," Conte added when asked about Oscar's future.

"I'm very happy with these players. Their commitment and attitude is very good.

"But after this period, I take the decision with the club."