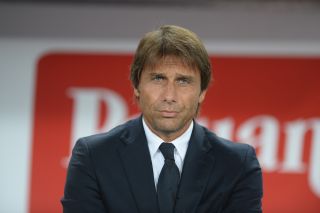 The Super Lig club confirmed the appointment of Roberto Mancini on Monday, with the Italian signing a three-year contract to replace previous boss Fatih Terim.

And the new addition has unsettled Conte ahead of his team’s encounter this week, with the 44-year-old not exactly sure what his men will come up against.

"I'm happy for Mancini, but I would have preferred to avoid meeting him tomorrow because he'll cause us problems," he said.

"Mancini's recent arrival means we will not have any insight as to how Galatasaray will play, making it a tougher prospect for us.

"We'll need to put in an intense performance, looking to win even though we know it will be a tough game."

While Conte is unsure how Mancini will line his new side up, he also has a number of selection problems of his own.

The Italian will continue to sweat on the fitness of striker Carlos Tevez, who is struggling with an ankle injury, but is boosted by the return of Mirko Vucinic.

"Tevez did not train yesterday. We'll check on him both today and tomorrow and see if he's fit enough to be involved," he added.

"Vucinic had a problem with his heel bone, but he's recovered and is in good condition. We'll see if he's involved."