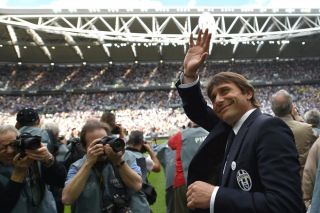 Conte signed with the Italian Football Federation on a deal taking him through to July 2016, with Zoff claiming Cesare Prandelli's successor was the right selection.

"Antonio has the right temperament and drive to raise the atmosphere after the disappointment of the World Cup," Zoff told Itasportpress.

"He's the right man to lift the Azzurri colours to the top. He can transform the Nazionale from a frog to a prince.

"I think he'll need a little time, but in the long run Italy will become like Juve: solid, determined and a winning team."

Montella said the former Juventus tactician, who led the Turin club to three consecutive Scudettos in as many seasons at the helm, was more suited to the role than former Manchester City and Galatasaray boss Roberto Mancini who was in the mix.

"Conte has proved himself to be a winning coach and at this moment I think he's the right man to lead the Nazionale," Montella said.

"It's the right choice, as he is the best coach in circulation."

Pjanic, who has played against Conte-coached sides since moving to the Italian capital club in 2011, said the new Italian boss will change the image of the national team.

"They certainly made the right decision, signing a very talented coach who had three great seasons at Juventus," the Bosnia and Herzegovina international told Roma's website.

"He will be good for Italy. I hope the Azzurri can go back to doing well and I don't see why they shouldn't, as they have the players to succeed.

"They need to be more relaxed, as there is far too much talk of the ugly things in football. That's the image I get.

According to reports, Conte has brought in Angelo Alessio and Massimo Carrera as assistants from his time at Juve.

Paolo Bertelli is set to be revealed as the Italy fitness coach, with Conte expected to confirm at his unveiling press conference on Tuesday.