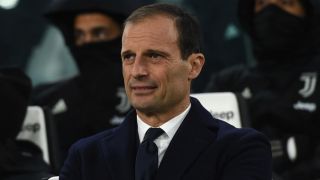 Former Juve boss Conte set the record during his time in Turin, leading the Bianconeri to 102 points in the 2013-14 season.

Speaking of the record afterwards, Allegri told reporters: "Conte's record of points in Serie A with Juventus, we will hardly be able to beat it.

"But the important thing now was to get back to plus-11 [points] from Napoli and try to get to plus 14 on Friday, and only then we will think about the Champions [League].

"What matters to me is winning the Scudetto, winning a thousand points is pointless; we have to be good, in this moment, at bringing home points."

Juve, who have won 20 of their 23 Serie A fixtures this season, will host Frosinone on Friday before travelling to Atletico Madrid for the first leg of their Champions League last-16 tie on February 20.