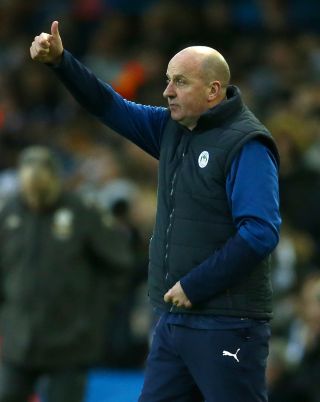 Wigan manager Paul Cook praised his team’s character as their revival continued with a 1-0 win over Sky Bet Championship leaders West Brom at The Hawthorns.

Sam Morsy’s 73rd-minute goal was all that separated the teams but Wigan were deserved winners.

The Latics made it three straight Championship wins for the first time in six years and made it 17 points out of the last 24 to climb to 19th and three points above the relegation zone.

“These lads have never won three games on the bounce in this division,” said Cook.

“The lads have shown great character and now they’re seeing games out, they’ve kept clean sheets, and since Christmas, we’ve took the lead in every away game.

“The last couple of times they’ve seen it out, so they’re learning.”

“It was a great finish – to score with that aggressive finish was important because the ball was bobbling about, wanting someone to have that belief in themselves to go and take that,” said Cook.

Morsy has been on nine bookings since December 23, with another yellow card triggering a suspension, and Cook also paid tribute to his captain’s leadership by example.

“He should have behaved better before Christmas: he’s like a naughty boy – he’s been very naughty!” said Cook. “But now he’s behaving.

“He’s showing great discipline in his game and he’s being a proper captain, leading by example.”

Cook believes the criticism he and his team received when they were bottom of the table is part of the culture of modern football.

“In general as the team at the bottom, you get criticised. That’s football today,” he said.

“I’m not levelling that at Wigan, but football in general, the culture.”

Wigan deserved their win and could have won by more.

Gavin Massey headed against the outside of the post and Gary Roberts and Jamal Lowe denied on one on ones with goalkeeper Sam Johnstone.

“We were not good enough, we looked tired and were without a spark,” he said.

“We were second best, we didn’t manage the ball well. The dressing room is very flat and silent.”

But the Croat stressed they must keep the belief that has seen them top of the table for most of the season.

“We have to get back on the training ground with smiles and a big determination to learn from these mistakes,” he said.

“We can’t say we were unlucky but they can’t start doubting themselves.

“It is easy to say we didn’t take the game seriously enough but we did.

“It was a great opportunity for us, you have to win these types of games.

“It was always going to be a hard game – I told the players that.

“We were playing too direct without pushing up to get those second balls.

“We tried to change it in the second half with new players but it wasn’t to be.

“I didn’t think the players were tired beforehand – I spoke to them and they seemed up for it, but we didn’t have that team energy.”