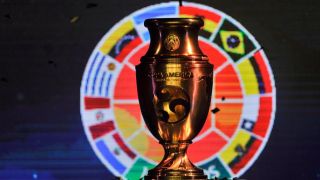 After months of counting down, stars Lionel Messi, Alexis Sanchez, Luis Suarez, Philippe Coutinho, Arturo Vidal and Sergio Aguero will descend on the United States for the special centenary edition of the Copa America.

For the first time in history, the showpiece tournament will take place outside of South America, with USA staging the event, christened the Copa America Centenario.

In celebration of the 100th anniversary of the tournament, six countries from CONCACAF will join the 10 CONMEBOL members in vying to be crowned Copa America champions.

Title holders Chile are bidding to become the first nation since Brazil in 2007 to go back-to-back, after lifting the trophy 12 months ago, though they will have to get past heavyweights Argentina, Uruguay and Brazil.

We take a look at the four groups making up this year's Copa America:

All eyes will be on USA when the hosts open the tournament against Colombia on Friday. Playing in the Copa America for the first time since 2007, Jurgen Klinsmann and Co. are determined to make amends on home soil, having failed to advance to the final of last year's CONCACAF Gold Cup as co-hosts. It could also be a breakout campaign for Borussia Dortmund teenager Christian Pulisic, who is the youngster goalscorer in USA history. Carlos Bacca will spearhead Colombia's title bid, with Jackson Martinez and Radamel Falcao both absent. Captain James Rodriguez is desperate to put a disappointing club campaign behind him, after falling out of favour at Real Madrid, as Colombia seek to better their quarter-final appearance of 2015. Paraguay went one better than Colombia 12 months ago, powering through to the semi-finals before their run was abruptly halted by Argentina. A year on, and Paraguay will be without their all-time leading goalscorer Roque Santa Cruz, Lucas Barrios and Victor Caceres. Costa Rica - winners of the 2014 Copa Centroamericana - make up the group and they already face an uphill task with number one goalkeeper and recently crowned Champions League winner Keylor Navas ruled out due to an Achilles problem.

How will Brazil cope without captain Neymar? The skipper has bypassed the Copa America in favour of representing Brazil on home soil at the Olympic Games in August. With the Barcelona star not in the squad, as well as Douglas Costa, Dunga's hopes rest on Philippe Coutinho, Willian and Co. as the eight-time champions look to win their first Copa America title since 2007. Ecuador and Peru are set to vie for second spot. Ecuador failed to make it out of the group last year, only winning once, and head into the tournament without a win in three games. Peru surprised many when they won the third-place play-off in 2015, having lost to eventual champions Chile in the semi-finals. This time around, the Peruvians are without experienced duo Claudio Pizarro and Jefferson Farfan, who are among the country's top five all-time leading scorers. Peru open their campaign against Haiti. The Caribbean minnows booked a Copa America berth via a quarter-final appearance at the Gold Cup and a play-off victory over Trinidad and Tobago. And fans will be able to watch the players in action back home in Haiti thanks to injured USA striker Jozy Altidore, whose parents are from the country, after teaming up with his foundation to help televise the event.

Uruguay's hopes of claiming a 16th Copa America title rest heavily on Suarez, who broke the 50-goal mark for Barca in 2015-16. The 84-cap star is set to play his first major tournament since he was banned for biting Italy defender Giorgio Chiellini at the 2014 World Cup. Suarez, though, heads into the Copa America under an injury cloud. Scorer of 45 international goals, Suarez hobbled off in tears due to a hamstring injury in Barca's Copa del Rey triumph in May. His status remains unclear for the group stage, but expect the 29-year-old to feature prominently in the knockout phase, should Uruguay finish inside the top two. More likely than not, Uruguay and Mexico will advance to the quarter-finals. Fans and pundits will get a good idea of where the two teams stand when they face off in the first game. Mexico coach Juan Carlos Osorio, with some decisions apparently out of his hands, has made some tough calls after not including Carlos Vela and brothers Giovani and Jonathan dos Santos. The Mexicans have been in fine form heading into the tournament. Rafael Dudamel is only two months into his job as Venezuela coach and Gold Cup runners-up Jamaica look to cause Uruguay and Mexico problems.

It has been 23 years since Argentina last lifted a major trophy. The nation had two near misses in the space of two years, reaching both the World Cup final and Copa America decider. With five-time Ballon d'Or winner Lionel Messi at the peak of his powers following another magical season, inspiring Barca to a domestic double, and Gonzalo Higuain coming off a historic season after breaking the Serie A's long-standing goalscoring record, Argentina are favourites to match Uruguay's haul of 15 Copa America titles. Standing in the way are defending champions Chile. The two South American giants will face off against each other on matchday one, in a rematch of the 2015 final, and it will almost certainly decide top spot in the group. Chile have experienced indifferent form since that historic night on home soil in Santiago. With coach Jorge Sampaoli having left, there are fears Sanchez, Vidal and Co. have peaked following an unconvincing start to World Cup qualifying. Panama, beneficiaries of a Copa America play-off, and Bolivia are also set for battle. Despite winning through to the quarters last year, the new-look Bolivian side - which includes 12 players with 10 caps or less - are tipped to make a swift exit in the midst of a four-match losing streak.