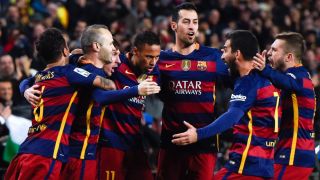 Lionel Messi led Barcelona to a convincing first-leg last-16 win over Espanyol in the Copa del Rey, while Valencia were also impressive.

Messi scored a brace and set up goals for Gerard Pique and Neymar as Luis Enrique's Barca recorded a 4-1 victory at Camp Nou on Wednesday.

After falling behind early on, thanks to Felipe Caicedo's goal, holders Barca retaliated within four minutes thanks to Messi and they went on to dominate proceedings.

Messi added his 241st goal in 241 home matches for the hosts with a sensational free-kick just before half-time and then teed up Pique in the early stages of the second period for Barcelona's third as Espanyol were unable to handle Luis Enrique's men.

The away side were reduced to 10 men with 18 minutes left following the dismissal of Hernan Perez and then saw Pape Diop handed a straight red – apparently for a comment made in the direction of Luis Suarez – as Espanyol lost all discipline late on.

Neymar rubbed salt into their wounds with an excellent fourth at the end of Messi's second assist of the night in the 88th minute.

Valencia were also impressive as Gary Neville's men thrashed Granada 4-0 at the Mestalla.

Alvaro Negredo scored a hat-trick, capitalising on a defensive error to put away the opener before Rodrigo tapped in the second after a fine team move.

Negredo netted twice from the penalty spot in the second half to complete the win.

Meanwhile, Saul Niguez came off the bench to score his fifth goal of a breakthrough season as La Liga leaders Atletico Madrid were held to a 1-1 draw by neighbours Rayo Vallecano.

Diego Simeone's side struggled for clear-cut chances until Luciano Vietto and Saul came on, and the substitutes combined impressively for the equaliser – the goalscorer offering a muted celebration having spent the 2013-14 campaign on loan at Rayo.

Nacho Martinez had opened the scoring for Rayo in the 35th minute.

Elsewhere, Sevilla recorded a 2-0 win at Real Betis and Athletic Bilbao claimed a come-from-behind 3-2 victory at home to Villarreal.

Deportivo La Coruna were held to a 1-1 draw at second-tier Mirandes.