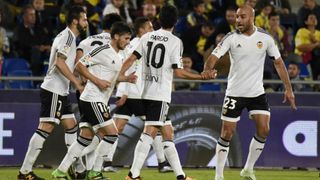 The Copa del Rey continues to offer Valencia and Gary Neville the ideal respite from their league struggles as they joined Sevilla in the semi-finals courtesy of a 1-0 second-leg victory over Las Palmas.

Neville's men are yet to win in La Liga under the former England international's stewardship and went into Thursday's second leg tied 1-1 from their previous meeting at the Mestalla.

And Valencia made an ideal start when Rodrigo opened the scoring 20 minutes in as he converted Andre Gomes' delivery amid suspicions of offside.

Rodrigo's strike secured Valencia a potentially crucial away goal and put them into the lead in the tie, although Neville's men endured some late nervy moments.

Aythami Artiles had the pick of the visitors' chances in the final stages as he headed Jonathan Viera's cross wide, but Valencia did enough to move into the final four alongside Barcelona, Celta Vigo and Sevilla.

A 3-0 win for Unai Emery's men in Seville gave them the ideal platform to book a place in the semi-finals and they wasted little time in making life more comfortable for themselves against their Segunda Division hosts Mirandes.

Ion Velez brought down Sevilla midfielder Sebastian Cristoforo inside the area, allowing Vicente Iborra to open the scoring nine minutes in and guarantee a reassuring away goal.

The visitors were made to wait for their second, however, which came courtesy of Juan Munoz's side-foot after a Vitolo cross following smart work down the left-hand side 20 minutes from time.

Sevilla have now reached the semi-finals of the competition six times in the last ten years.