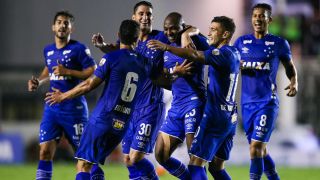 Colo-Colo boosted their chances of reaching the Copa Libertadores knockout stage, while Cruzeiro made it back-to-back wins.

After kick-off was delayed due to lighting issues at the Estadio Jocay in Manta, Colo-Colo recorded a 2-1 win over Delfin in Group 2.

Jaime Valdes poked in the opening goal for the Chileans in the 21st minute before Geovanny Nazareno was sent off for Delfin.

Esteban Paredes converted a penalty on the stroke of half-time for Colo-Colo, who saw out a win despite Luis Chicaiza's 79th-minute strike for the hosts.

The win was Colo-Colo's first in the group as they moved onto four points, just one adrift of second-placed Bolivar with two games remaining.

Less than a week after crushing Universidad de Chile 7-0, Cruzeiro were once again in rampant form.

Egidio was the star for the visitors, setting up Leo's 10th-minute opener before teeing up Thiago Neves.

Sassa made it 3-0 shortly after the half-hour mark, receiving a pass from Egidio before unleashing a stunning 30-yard strike.

The win was sealed early in the second half through Sassa as Cruzeiro moved top of Group 5.

Boca Juniors are in danger of making a group-stage exit after a 1-1 draw at Junior left them third in Group 8 with a game to play.

Independiente climbed into second in Group 7 with a 2-1 win at Corinthians and Atletico Tucuman edged Penarol 1-0 in Group 3.