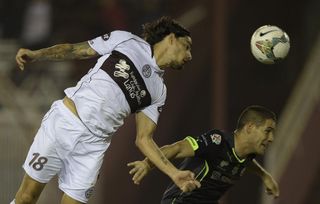 Argentine outfit Lanus took a 2-1 lead to Mexico and completed a 4-1 aggregate victory over Santos Laguna with a 2-0 second-leg win.

Ismael Blanco and Paolo Goltz were on the scoresheet either side of half-time, while the hosts had Andres Renteria sent off during the second half.

Lanus were always on track to progress after Blanco put them ahead on 28 minutes.

The experienced attacker was on hand to capitalise on a defensive blunder and scramble in the opener for the visitors.

Progression was sealed just six minutes after the break as Goltz stepped up to fire home a powerful penalty.

Santos Laguna attacker Renteria was shown a straight red card with 16 minutes remaining, ending any small hope the hosts had of a comeback win.

While Lanus advanced, three teams – Atletico Nacional, Nacional Asuncion and San Lorenzo – claimed first-leg wins in the round of 16.

Atletico Mineiro, the 2013 champions, conceded a late goal in a 1-0 loss at Colombia's Atletico Nacional.

Sherman Cardenas struck a stunning 91st-minute winner for the hosts at the Estadio Atanasio Girardot.

The attacker cut inside from the right and his powerful 30-yard effort found the top corner of Victor's net.

Julian Benitez put away a Fredy Bareiro cross at the back post and the goal was ruled to have crossed the line after goalkeeper Sebastian Sosa's attempted clearance.