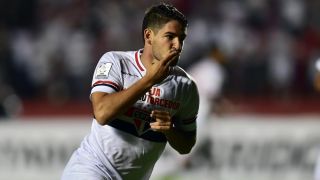 The 25-year-old striker continued his February scoring spree, notching his eighth goal in six matches in all competitions as Sao Paulo thrashed Danubio 4-0.

Pato, who is on loan from Sao Paulo's city rivals Corinthians, struck twice in the first half, while Reinaldo and Jonathan Cafu added goals after the break to see off their Uruguayan visitors.

The win took Pato and Co. to the top of Group Two on goals scored ahead of Corinthians, who won the Sao Paulo derby 2-0 in the Copa Libertadores last week.

Danubio slipped to third, level with Sao Paulo and Corinthians on three points but behind on goal difference.

Pato missed last week's derby due to his loan deal but it took him just three minutes to continue his brilliant scoring form, with the former Milan forward volleying Reinaldo's cross from the left into the roof of the net.

In the 41st minute, Pato made a late run into the box to head a cross from right-back Bruno past Danubio goalkeeper Franco Torgnascioli.

The Brazilian hosts stretched their lead further with 21 minutes remaining in the match thanks to Reinaldo's 20-yard drive and, after Danubio were reduced to 10 thanks to Hamilton Pereira's straight red card, Cafu capped off Sao Paulo's win with a sharp finish in the 89th minute.

In Group Seven, Estudiantes opened their continental campaign with a 3-0 win over Ecuador's Barcelona thanks to a hat-trick from Guido Carrillo.

The 23-year-old striker increased his tally to five goals from as many matches in all competitions this season, as Estudiantes secured top spot in their group's standings.

In other results, Atlas continued Atletico Mineiro's poor start to South America's premier club competition, triumphing 1-0 in Brazil as their hosts slumped to consecutive defeats, while Cruzeiro held Club Universitario to a scoreless draw in Bolivia.