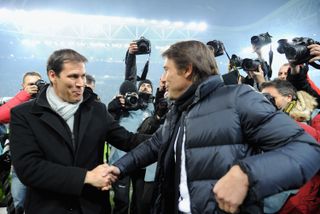 Roma, beaten by rivals Lazio in last year's final, are eight points behind league leaders Juve, who have won their last 12 Serie A matches.

The pair have lost just two league games between them all season, with Roma's solitary defeat coming against the champions earlier this month.

Rudi Garcia's side have responded well to that setback, winning three games in a row without conceding a goal.

Roma took their clean-sheet tally in league matches to 13 from 20 games with Saturday's 3-0 win over Livorno, and Garcia was happy that his charges were not distracted by the prospect of meeting Juventus.

"I'm pleased that my players were focused on the task at hand without getting distracted by Tuesday's game."

Clarence Seedorf played for Milan the last time they won the competition in 2002-03 and he will take charge of his first Coppa Italia game as coach against Udinese on Wednesday.

Udinese's Coppa Italia form has been one of few positives in an otherwise poor campaign for Francesco Guidolin's men, who sit 15th after a run of just one win in seven Serie A fixtures.

Guidolin guided his side to a shock 1-0 victory over Inter in the previous round, with Maicosuel grabbing the decisive goal.

Six-time winners Fiorentina have what appears to be the easiest tie as they host second-tier Siena.

However, Mario Beretta's men have taken three top-flight scalps already this season, knocking out Livorno, Bologna and Catania away from home to reach the last eight.

Holders Lazio travel to Napoli on January 29 with revenge in mind, having been beaten 4-2 on home soil in the league by Rafael Benitez's side in December.