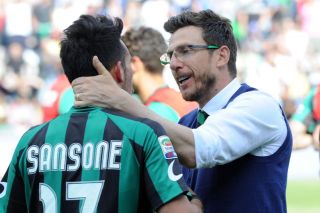 The second-tier side put up a good fight in the first period at Stadio Citta del Tricolore and went into the break level, but the Serie A club's quality eventually shone through.

Claudio Coralli's 33rd-minute equaliser brought the visitors back into the contest after Simone Zaza had opened the scoring from Domenico Berardi's corner early on, but the second half was a different story.

The highly rated Berardi was influential again as Sassuolo took the lead soon after the break.

The 20-year-old picked out Nicola Sansone from deep and the forward found the net, before adding a second with a solo effort seven minutes from the end.

Former Udinese striker Antonio Floro Flores put the match beyond any doubt in second-half stoppage time, ensuring their passage to the fourth round.

Sassuolo will play either Pescara or Chievo in the next round, with their tie taking place on Friday.