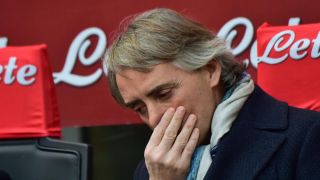 Alvaro Morata scored twice – his first goals since October 4 – and Paulo Dybala added a third for Juve, while Inter ended the match with 10 men following the dismissal of Jeison Murillo and have a mammoth task on their hands in the return fixture on March 1 if they are to reach their first Coppa final since 2011.

He told Rai Sport: "[It was] a balanced game. Juventus pushed more and found the penalty [Morata's opener].

"It was a strange game. The 3-0 seems an exaggerated result, but this is football. That was the game we wanted to play, we could have been more effective in front of goal, but up until the penalty Juve had created little.

"The result is quite difficult to [come back from]. Miranda and Murillo will be missing, but we will find a solution.

"Juve deserved to win, but I do not remember Handanovic's saves or times when we were in difficulty.

"We have to remain calm and peaceful, despite the disappointment of the result."