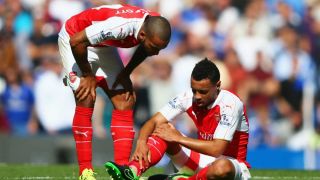 Arsene Wenger has ruled Francis Coquelin out of contention for Arsenal's clash with Tottenham on Wednesday, but Per Mertesacker is fit to return.

Coquelin landed awkwardly in the 2-0 Premier League defeat to Chelsea on Saturday and suffered swelling to his knee that the Arsenal manager has confirmed will keep him out of the League Cup third-round meeting with their north London rivals.

There is, however, better news concerning Germany international Mertesacker, who has been sidelined due to illness for much of the campaign so far.

"Francis Coquelin will be out and we have no major problems for anybody else. It should be a similar squad [to the Chelsea defeat]," Wenger told the club's official website.

"His knee is swollen and he is being assessed but we hope it is just a short-term problem.

"Mertesacker is available for selection, yes."

Wenger also revealed that "one or two" youngsters could be given a chance in the first team for the trip to White Hart Lane, with 19-year-old forward Alex Iwobi among those vying for a place.

"I want to keep the squad together. We go game by game so I will make changes, for sure. How many? I've not decided yet. It will be quite an experienced squad with one or two younger players," Wenger added.

"Iwobi is in and out a little bit because we travel a lot. He is doing well."