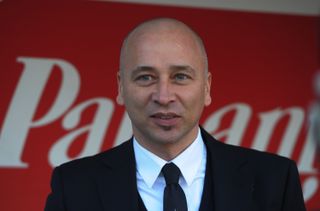 Inter boss Walter Mazzarri claimed after the match that Chievo had not allowed the home side to 'play good football' at the San Siro and that the visitors had just hoped 'for a mistake'.

But Corini, who rejoined Chievo in November after leaving in May, hit back at Mazzarri, arguing his team simply need points and that a strong defensive structure was their best chance of getting a result away to Inter.

"If not allowing your opponents to have a shot on goal is a bad thing, then I'll take that," Corini told Sky Sport Italia after the match.

"We have to make the most of our strengths and our resources.

"I understand the home fans jeered because they expected more but every point is precious for us."

Chievo had just one shot on target from nine attempts at the San Siro with Alberto Paloschi's rasping drive beating Inter goalkeeper Samir Handanovic in the eighth minute.

Nagamoto looked to have put Inter in front just two minutes later but the goal was disallowed incorrectly for offside and while Inter had 71 per cent possession for the game, Mazzarri's men were unable to break down Chievo's defence again.

The draw took the Verona-based club up to 16th in Serie A - a point outside the relegation zone - but Corini warned his team they still have a lot of work to do to avoid playing in Serie B next season.

"It was an important performance but one we built over time," the 43-year-old said.

"In November I resumed the work I had started with this team last season and we've had some good results together.

"We know it is a long road ahead of us but we are confident that we'll achieve our objective again this year."