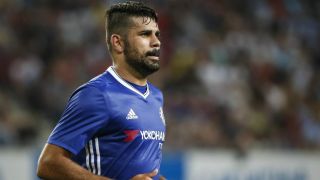 Chelsea striker Diego Costa is looking forward to fighting for the Premier League title in 2016-17 and feels his team cannot be any worse than last season.

The defending champions endured a dismal campaign, finishing 10th in the top flight as they failed to lift a trophy or qualify for Europe.

New manager Antonio Conte, who replaced interim boss Guus Hiddink at Stamford Bridge, has been tasked with restoring Chelsea's fortunes in his first club role since guiding Juventus to the Serie A title in 2013-14.

And Costa, despite having been linked with a return to Atletico Madrid, insists Conte's impact is already being felt within the squad as they attempt to put the previous campaign firmly behind them.

"I think we can't make it worse than last year," he said, speaking ahead of the International Champions Cup clash with Liverpool in California.

"Last season was not good and a team like Chelsea cannot be so low down. We know we have enough to be fighting at the top.

"It is very important to have games and training to get to know each other and to reach what the coach wants, so we have to take advantage of this situation.

"We are working very hard. You can see that he wants to do the right things and we have plenty of excitement. I think he [Conte] is going to be good for the team and the players are noticing some changes, and now we have to put into practice what he is asking us.

"We are training hard, and I hope the coach will give us a day off!"

Juan Cuadrado is another who has been linked with a move away from Chelsea, particularly as the Colombia international spent last season on loan with Serie A champions Juve.

But the 28-year-old says he is focused on winning a place in Conte's starting line-up for when their Premier League campaign begins against West Ham on August 15.

"It is the objective of every player. I am working hard and I hope I will get it," he said. "We have to play the way we are training and to take on the coach's style.

"It is important to be here and also for us to finish well. We want to do a good pre-season. We are working hard and we are doing what the coach is asking of us."