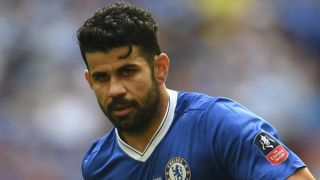 Marseille president Jacques-Henri Eyraud indicated that Diego Costa may be the solution to his search for a new striker but admitted the Spaniard has a "complicated contractual situation" at Chelsea.

Costa has been told he is not in Antonio Conte's plans at Chelsea this season, despite scoring 20 goals during their title-winning Premier League campaign in 2016-17.

Marseille are in need of a striker following the departure of Bafetimbi Gomis, who scored 20 Ligue 1 goals for the Ligue 1 club during a season-long loan from Swansea City last term.

When asked about Costa as a potential signing, Eyraud told SFR Sport: "I like his character, his grit and his sense of combat.

"He would fit in very well at OM. However, he has a complicated contractual situation."

Eyraud said Marseille's acquisitions prove he will not hesitate to move for the players he wants, and suggested he will attempt to sign Costa if a deal can be agreed with Chelsea.

"If a player ticks all the boxes, then we showed that we were able to do the transactions," Eyraud said.

"Why not? But it [the deal] must at least meet certain conditions.

He added: "I assure nothing [to the fans] for the end of the market. It is a sensitive subject.

"But one thing is certain - we are actively searching for a striker."