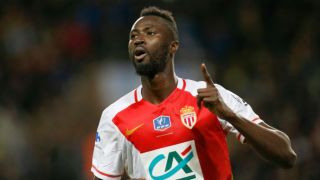 Pascal Baills and Bruno Genesio enjoyed positive starts to their spells with Montpellier and Lyon, presiding over Coupe de France victories against Epernay and Limoges respectively on Sunday.

Baills was confirmed as Rolland Courbis' replacement before the turn of the year while Lyon's former assistant Genesio was also appointed as Hubert Fournier's replacement during the winter break.

And both moved into the last 32 on Sunday against fifth-tier opponents, although Lyon enjoyed a much more routine examination during their 7-0 success at the Complexe Sportif Michel Amand - Maxwell Cornet and Rachid Ghezzal scoring twice each.

Montpellier needed just a Mustapha Yatabare goal to ensure their narrow success in Epernay - the four-time champions joining Monaco in the next round after a resounding 10-2 win over seventh-tier amateur opponents Saint-Jean Beaulieu.

Lacina Traore was in the thick of things for Monaco against their near-neighbours as the Ivorian scored four times before being dismissed along with opponent Yann Mariotti for an apparent exchange at half-time.

"[Lacina] told the other player: 'Shut your mouth.' I'll be very interested to know the justification from the referee," Monaco boss Leonardo Jardim said afterwards.

Even after Traore's exit, Leonardo Jardim's men proved a cut above - Fabinho scoring a brace from the spot - while holders Paris Saint-Germain edged past Wasquehal 1-0.

The Championnat de France Amateur side fought hard but were undone by Zlatan Ibrahimovic in a 1-0 defeat, while PSG's top-tier rivals Saint-Etienne were taken all the way by fifth-tier Raon l'Etape.

Christophe Galtier's men sit sixth in Ligue 1 and led through Neal Maupay after 21 minutes before Jonathan Clauss struck just before the hour to send the game to extra time and later penalties.

Saint-Etienne failed to convert two of their first three spot-kicks but made the most of three missed penalties from their hosts to squeeze through along with Marseille, who also needed penalties to get past Caen after 120 goalless minutes.

Bordeaux were given a stern test in their 3-2 win at Frejus St-Raphael - Diego Rolan getting the winner after 90 minutes - while Ligue 2's Evian needed extra time to pull clear of fifth-tier Annecy at the Parc des Sports -as Seydou Keita's second of the day and further goals from Gustavo Campanharo and Ibrahim Toure ended hopes of an upset.

There were contrasting fortunes for two other CFA 2 sides as Lorient ended Tours' hopes in extra time with a 3-2 win, while Sarreguemines sprung a surprise to see off Valenciennes - El Hassane M'Barki's early strike enough to earn progression.

Ligue 1 Guingamp - winners in 2014 - beat Chantilly 4-0 thanks to four second-half goals while Tallo Gadji's penalty before the break earned Lille a 1-0 win at Amiens.

Trelissac ran out 2-0 winners at Muret, Bourg en Bresse avoided an upset with a 3-1 win against fourth-tier Mulhouse and Boulogne held their nerve in the penalty shootout against Saint-Omer, while Julien Toudic's late winner helped Ligue 2 Ajaccio to a 1-0 win against amateur side Volvic.