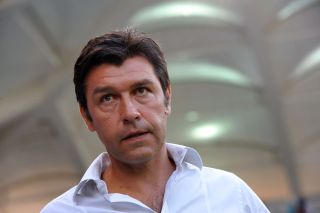 Claudio Ranieri's side - who lie second in Ligue 1 on goal difference - fell to a 1-0 defeat at Reims.

Antoine Devaux scored the only goal of the game in the 34th minute and despite Monaco's best attempts at scoring an equaliser, Hubert Fournier's men held on to book their spot in the next round.

Montpellier - who finished runners-up in 2011 - crashed out to Ligue 1 strugglers Sochaux, who won a thrilling contest 3-2 after extra time.

Sanjin Prcic put Sochaux into a first-half lead, but the match required extra time thanks to Jonas Martin's 50th-minute penalty.

The match looked destined for penalties until Sebastien Corchia's goal in the 115th minute, and Roy Contout doubled Sochaux's lead with just a minute of extra time remaining.

And although Benjamin Stambouli managed a late goal for Montpellier, Sochaux held on for victory.

In Wednesday's other match, Evian came from behind to defeat Guingamp 2-1.

Guingamp - who occupy fifth in Ligue 1 – took the lead thanks to Mustapha Yatabare's 25th-minute strike.

But they were shocked by Evian's second-half resurgence, as Modou Sougou and Cedric Cambon scored to book their place in the last 16.