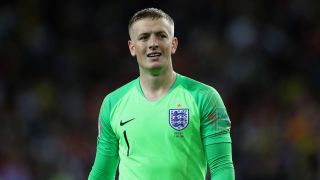 Pickford defended his ability after letting in an Adnan Januzaj winner when the two nations met in their final Group G clash last week.

Courtois raised his Everton counterpart's relatively small stature as a factor in his failure to make the save, suggesting he was "too busy throwing his legs in the air".

But, speaking in the aftermath of Belgium's 2-1 quarter-final upset of Brazil on Friday, Courtois was at pains to praise his fellow gloveman.

"This thing about Jordan Pickford, I want to make it clear, I never mocked his height," Courtois told the BBC.

"I would never mock the height of a goalkeeper.

"He is a great goalkeeper and he has proved that this year. I want to make that clear."

Pickford went on to make a vital penalty save in England's shoot-out victory over Colombia in the last 16, while Courtois was instrumental in seeing off Brazil.

The pair could yet meet again in the World Cup final with England to face Sweden on Saturday for the chance to reach the final four.