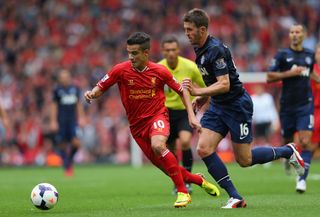 The Brazilian playmaker has been out of action for around six weeks after undergoing surgery on a shoulder injury he picked up in the 2-2 draw at Swansea City in September.

Coutinho returned to training ahead of joint second-placed Liverpool’s 4-1 defeat of West Brom last weekend, and Liverpool boss Brendan Rodgers has revealed the 21-year-old is available for the game against Premier League leaders Arsenal.

However, the trip to the Emirates Stadium is likely to come too soon for left-back Jose Enrique, who continues to struggle with a knee problem.

"Jose will be a question mark for the weekend, but Coutinho looks great," said Rodgers.

"He's been given the all clear by the specialist to come in. He’s been training for the last few weeks, so he’ll be back into the squad."