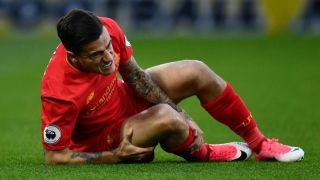 Philippe Coutinho has recovered from the dead leg that forced him off early in Liverpool's victory at Watford and expects to be fit for the push to secure Champions League qualification.

The playmaker had to be substituted just 13 minutes into the Reds' 1-0 win at Vicarage Road on Monday following a challenge from Adrian Mariappa.

The 24-year-old Brazil international has spent some time out of training this week as a consequence, but hopes to be back when Jurgen Klopp's team, third in the Premier League table, host Southampton on Sunday.

"The injury is much better," he told the club's website.

"It was a hard tackle and what happened was a dead leg. It caused a lot of pain in the area I was hit, but the pain has reduced now.

"At the moment, I am feeling very well – the first couple of days were the most painful.

"Of course, when you have to come out of such an important game like this one, and when you leave that early, it frustrates you, but thanks to God it was nothing major – just a strong tackle.

"It was nothing too serious and the main thing was we won the game and we left the match very pleased and happy because the result was very good for us. The main thing was for us to come home with the three points."

Liverpool are three points clear of fourth-placed Manchester City and four points ahead of Manchester United in fifth, although both teams hold a game in hand over Klopp's men.

The Reds will be aiming to secure third and earn a route straight through to the Champions League group stage, rather than being forced to negotiate a play-off.

"These three points are very important for us – they kept us fighting for the top four and left our aim in our own hands," Coutinho said of the win over Watford.

"We have a target to keep ourselves up there and we have to fight for that because everything is in our hands.

"These three points were very important, but now we have three games left and we have to win them, although we understand that will be a very difficult task.

"As I've said before, every game in the Premier League is very difficult, but if we want to achieve our aims, we have to go through tough games and win them. If we win them, then we will be there in the Champions League next year."