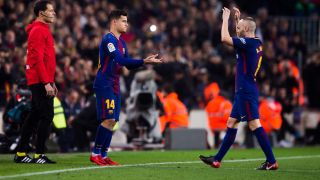 Iniesta, 33, continues to play a key role for the LaLiga leaders, featuring 25 times in all competitions this season.

Coutinho, who arrived at Camp Nou in January, said the Spain international made the players around him better.

"Andres is a genius, and anyone who plays with him he will make them better," Coutinho told 8TV.

"I am enjoying my time together with him and also with Leo [Messi], for me they are idols."

Coutinho has made just four appearances for Barca so far after leaving Liverpool in a reported €160million deal.

The Brazil international said he was unfazed by what position he is used in by coach Ernesto Valverde.

"I don't care about the position, I'll play where the coach tells me," Coutinho said.

"It's all different at Barcelona, and though I've played more times on the left, I'll adapt wherever."