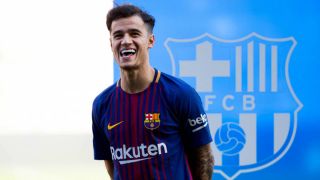 Philippe Coutinho and Yerry Mina could make their Barcelona debuts in the Copa del Rey quarter-final second leg with Espanyol on Thursday having been named in the squad for the first time.

Barca broke their transfer record to bring Coutinho to the club at the start of January in a deal which could eventually rise to €160million.

The 25-year-old was already suffering with a thigh injury before leaving Liverpool and that has so far prevented him from featuring with his new team-mates.

But the Brazilian international's long-awaited debut appears to be imminent having been handed the number 14 jersey - famously worn by Johan Cruyff and recently vacated by Javier Mascherano - and named in the squad for Thursday's clash, as Espanyol visit Camp Nou with a 1-0 lead.

Colombian defender Mina could also feature for the first time after he joined from Palmeiras for a reported €12m.

There are also returns for Andres Iniesta and Paco Alcacer, who had been nursing injuries.