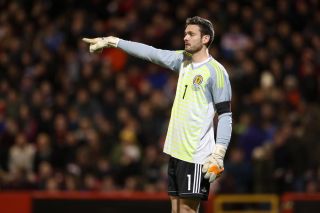 Craig Gordon has warned that minnows San Marino will be smelling blood as they look to cause another upset against Scotland on Sunday.

Alex McLeish’s side suffered a major blow to their Euro 2020 hopes after losing their opening qualifier 3-0 to Kazakhstan.

Defeat to the team ranked 117th in the world sits alongside some of the most humiliating displays ever produced by a Scotland team.

And Celtic and Scotland goalkeeper Gordon says San Marino – who sit rock bottom of the global football ladder – will now believe they can repeat the act when they welcome McLeish’s shell-shocked outfit to Serravalle.

Gordon – who missed out on the clash in Nursultan after losing his place for both club and country to Scott Bain – told Sky Sports: “It’s tough, this is going to be one of the longest flights of their lives.

“They’ve got six hours back to reflect on a performance that was nowhere near good enough.

“I’ve been there myself in bad defeats and that dressing room is not a nice place to be. It will be a quiet place at the moment.

“They are going to have to pick themselves up after that – but San Marino might fancy their chances after watching that result.

“It’s important we go again and try to get a result. It’s not going to eradicate that one but we need to pick ourselves up.”