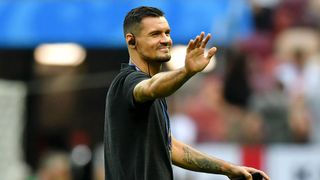 Liverpool centre-back Lovren was filmed in an Instagram video appearing to boast about elbowing Ramos in Croatia's dramatic Nations League win over Spain on Thursday.

The pair have been at odds since Spain's 6-0 thumping of the World Cup finalists in September, during which Lovren felt his team had been disrespected.

The former Southampton man later claimed the Real Madrid captain was made to look good by his team-mates and doubled down on his criticism after the 3-2 victory in Zagreb, labelling Luis Enrique's side "p*****s" and accusing them of lacking grace in defeat.

Dalic confirmed he would speak with Lovren, but would not discuss the likely nature of the conversation.

"I will talk personally with Dejan but that will stay between us in the squad," he said.

"I do not want to speak publicly about it."

Croatia meet England at Wembley on Sunday with both sides seeking the three points that would seal their place in the Nations League Finals.

Lovren, who considers himself among the finest defenders in the world, is expected to be tasked with the tough job of marking Harry Kane.

Asked whether his regular Premier League opponent or Madrid star Ramos was the better player, the England captain declined to fan the flames of the rivalry.

"That's not for me to compare the two," Kane said. "Obviously, I think Ramos' record speaks for itself, the amount of trophies he's won, the amount of big games he's played.

"Of course Lovren is another fantastic defender and I look forward to going up against him tomorrow.

"It's a matter of opinion, obviously [Lovren] has his opinion. Some players are more outspoken than others, but from my point of view it's not to judge them but focus on myself and my team."