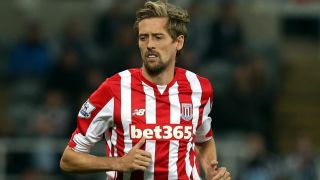 Peter Crouch could be on the way out of Stoke City with the striker unhappy at the amount of game time he is receiving at the Britannia Stadium.

Crouch scored the opener as Stoke defeated Doncaster Rovers 2-1 in the third round of the FA Cup on Saturday in what was his first since in over a month - where he was replaced after just 13 minutes due to injury.

The 34-year-old has seen just 45 minutes of Premier League action this season, with his only full 90 minutes coming in a League Cup win over Fulham in September.

And Crouch admits a move away may be necessary to get the game time he feels he deserves.

"Ideally I’d like to stay at Stoke because I think we’re a top 10 side and I’d like to be a part of that," said the former England international.

"But I’ve got to be realistic - I’ve featured hardly at all in the Premier League and that’s what I want to be doing. If needs be I’ll have to move on but I’d rather not.

"It’s been frustrating at times when you don’t feel part of the group but all you can do is work hard and get back in there and hopefully I’ve done myself a bit of justice."

Stoke manager Mark Hughes said he did not plan on selling Crouch despite interest from other clubs.

"It is true to say that there have been a few enquiries about Peter Crouch if I’m honest but he’s one I want to keep here," he said.