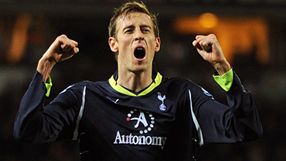 Harry Redknapp’s men produced a resilient and disciplined performance to hold Italian giants AC Milan to a goalless draw at White Hart Lane last Wednesday evening, ensuring they advanced to the quarter-finals of the Champions League courtesy of Crouch’s goal in the San Siro last month.

Arsenal, however, were not able to match the achievements of their local rivals, going out 4-3 on aggregate to Spanish champions Barcelona after last Tuesday’s 3-1 defeat at the Nou Camp.

Crouch feels upstaging Arsene Wenger’s side in Europe’s premier club competition is a significant achievement, and is convinced his team can go on to outshine the Gunners on a more regular basis at home and abroad.

Speaking to The People about the results, the 30-year-old England international said: "The fans certainly noticed it as well. You could hear them at the end, chanting: 'are you watching Arsenal?'

"It is great for the club because they have been above us for a number of years and it is nice to go one step further. We have wanted to get as close to Arsenal as possible.

"They are still ahead of us in the league, but we are getting a lot closer and soon we will be above them in the league.

"Hopefully, we'll keep doing better than them in the Champions League as well."

Arsenal’s conquerors Barcelona are thought to represent the biggest threat to the remaining English teams in this Friday’s quarter-final draw.

Crouch, however, remains adamant he and his team-mates fear no one, although he admits he would prefer to avoid Chelsea and Manchester United, assuming they qualify.

"The whole thing about playing in Europe is playing against big European teams and, if we can avoid the other English teams, it would be better," he said.