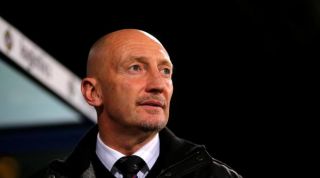 The newly promoted side have won just one league game since earning promotion from the Championship last term, which came in August as they beat bottom club Sunderland 3-1.

A 4-1 home defeat to Fulham on Monday heaped further pressure on Holloway, and the club have now confirmed the 50-year-old has left Selhurst Park by mutual consent.

Holloway took over at Selhurst Park in November 2012 after Dougie Freedman departed to join Bolton Wanderers, and secured promotion as Palace beat Watford 1-0 in the play-off final.

However, the former Blackpool boss admits his side have failed to maintain the attitude that helped secure promotion and feels a change is necessary to keep them in the the top flight.

"What I say at half-time normally has an effect on people. On Monday (against Fulham), it didn't," Holloway said at a press conference.

"I have to hold my hand up and say we didn't keep the spirit that got us up. We changed too much, too quickly.

"It is a privilege to have worked at Palace. With me out the way, the new man will have a chance to start again

"Someone new coming in now with a tad more experience at this level will have 30 games left."

Co-chairman Steve Parish insists his relationship with Holloway has ended on good terms, and is eager to bring in an experienced Premier League manager to help the club stay up.

"We've never fallen out. We've worked together brilliantly. We feel we need to move on to progress," Parish commented.

"Ian felt that a new approach might help keep us in the division.

"We've got a whole group of people who are only really used to the Championship and dropped them into the Premier League.

"I think we both realised we need someone with more experience at this level."