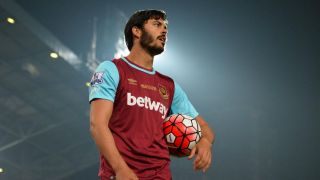 Crystal Palace have signed James Tomkins on a five-year contract after agreeing a £10million deal with West Ham.

Tomkins has been a regular fixture in West Ham squads since making his debut against Everton in 2008, going on to make nearly 250 appearances for the Hammers.

The centre-back becomes the Eagles’ third signing ahead of the new season after Andros Townsend and Steve Mandanda arrived last week.

"I am really excited to be joining Crystal Palace, a massive club and a manager in Alan Pardew that I know well and will always be thankful for how he helped me develop in my younger days at Upton Park," Tomkins said.

BREAKING: have completed the signing of defender James Tomkins for £10m from .  July 5, 2016

"I'm really pleased James has agreed to join us, he's someone Alan has always wanted to sign from his own days at West Ham," Parish stated.

"I'm sure he is destined to become a huge part of our team as we look to build on the progress the club has made over the last six years.

"It's been a really positive transfer window so far, everyone has worked really hard to make these deals happen and I think we are much stronger because of them."