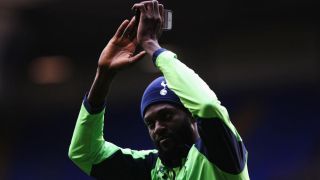 Emmanuel Adebayor is in line to make his Crystal Palace debut when AFC Bournemouth visit Selhurst Park on Tuesday, but the Eagles may be without two key midfielders.

Only one of Palace's 24 Premier League goals this season has been scored by a forward, Connor Wickham's strike in their December 19 win at Stoke City.

Manager Alan Pardew has turned to Adebayor in an attempt to solve his striking conundrum, in the hope that the Togo international can recapture the kind of form that has helped him score 96 Premier League goals in 230 games for Arsenal, Manchester City and Tottenham.

"There's a good chance [Adebayor] will be involved on Tuesday, he's pencilled in," Pardew said after his side beat Stoke 1-0 in the FA Cup on Saturday.

While Palace fans will be eager to watch Adebayor in action, they are unlikely to see either Yohan Cabaye or Joe Ledley, who are struggling with injuries.

The pair were replaced at half-time against Stoke, with Cabaye leaving the stadium on crutches in an effort to protect an ankle problem.

Mile Jedinak, who is set to fill in should the Frenchman be unable to face Bournemouth, has backed his team-mate to get back to full fitness quickly.

"It is unfortunate. I am not sure what the full extent of it is yet, but hopefully it's more of a precaution at this stage," the Australian told the Croydon Advertiser.

"Knowing Yohan, he's a tough competitor and he'll be doing everything he can to get back by Tuesday.

"We'll have to wait and see, but fingers crossed for our sake. If given the opportunity, I would be honoured to carry on playing."

Meanwhile, Bournemouth manager Eddie Howe is delighted to have skipper Tommy Elphick available to him once again following a long injury absence.

Elphick played 76 minutes of the Cherries' 2-1 victory at Portsmouth in the FA Cup on Saturday, having not featured since early September as he recovered from an ankle operation, and the central defender emerged from his comeback outing unscathed.

"It was crucial for the players to get minutes and it was great to have our captain back," Howe told Bournemouth's official website.

"Tommy got a good run out and we got Grabbs [Lewis Grabban] 90 minutes, Joshua King returned and they won't be at their best form immediately but they're getting fitter."

Junior Stanislas (medial ligament) is a major doubt for Bournemouth, while Max Gradel, Tyrone Mings and Callum Wilson (all knee) are all long-term absentees.

- Crystal Palace have picked up just one point in their last three league meetings with Bournemouth (W0 D1 L2).
- Emmanuel Adebayor has scored on his Premier League debut for all three of his previous clubs in the competition – Arsenal, Manchester City and Tottenham Hotspur.
- Only one player has scored on their debut for four different clubs in the Premier League; that player was Darren Bent (Charlton, Sunderland, Aston Villa and Fulham).
- Adebayor has scored against 30 of the 35 different opponents that he’s faced in the Premier League and this will be the first time he’s played against Bournemouth in the competition.
- Bournemouth have conceded a league-high 15 goals from set piece situations this season.