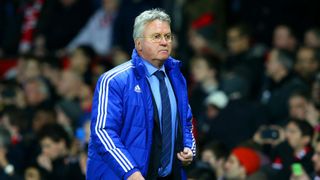 Guus Hiddink has urged Chelsea to turn their recent good run into a "winning period", starting with a tricky visit to Crystal Palace in the Premier League on Sunday.

Chelsea are unbeaten in the three matches they have played since Jose Mourinho departed the club last month.

Hiddink took a watching brief for a 3-1 win over Sunderland, before seeing Chelsea draw 2-2 with Watford and 0-0 against Manchester United over the festive period.

Chelsea now make the short trip to Selhurst Park and Hiddink, while praising the job done by opposite number Alan Pardew, is keen to turn draws into maximum points.

"Crystal Palace are doing well. Alan Pardew has done a marvellous job in the period he has been working there," Hiddink said.

"If you look at the statistics you have a team that has scored 23 goals in 19 games and just conceded 16 which means he is well organised with his team.

"We have started gathering some points. It [the draw with United] was the third consecutive game we didn't lose but that's not enough. We must come now in to a winning period of games, that's important.

"You see how it is, all the big teams are losing points as well. Nowadays it's very difficult and if you see where our next opponent is in the table they are close to the Champions League positions.

"So it's not that easy now to have a long-term winning sequence."

Chelsea need no reminding of the quality Palace possess having been beaten 2-1 by Pardew's men in August's reverse fixture, which was Mourinho's 100th Premier League game at Stamford Bridge.

That was one of nine league defeats that contributed to the Portuguese's downfall, and Palace also recorded a home win over Chelsea as recently as March 2014.

Fifth-placed Palace are on a six-match unbeaten run, but Pardew still rates Chelsea - who are 14th - as favourites to claim three points.

"Chelsea look like they have gone into a controlled phase of making sure they are stable in the league and will probably attack the cups," he said.

"They looked a bit more assured against Manchester United, so they are favourites for this game. Having said that, we are difficult to play at home at the moment."

Chelsea were forced to play without a recognised striker versus United and although Diego Costa returns from suspension Loic Remy (calf) remains a doubt and Radamel Falcao (thigh) is out.

Centre-back Gary Cahill (ankle) should be fit, though, while Palace are without key man Yohan Cabaye, who is suspended.