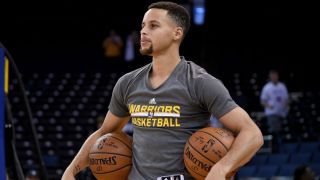 Golden State Warriors star Steph Curry wants to be on the court by any means necessary, even if that means borrowing gear from another sport.

The NBA's reigning MVP will wear shin pads, as seen in football, in his bid to play through a left shin contusion.

Curry is also approaching his game much like one of football's stars, Barcelona forward and Argentina captain Lionel Messi.

"I've got to bring out my Messi mindset tonight, so we'll see," Curry said while discussing his shin pads. "We'll keep trying out stuff till we find something that works, and then once I obviously, hopefully get through this, I'll be back to my normal attire."

Curry, who leads the NBA in scoring at 29.3 points per game, has missed two games with the injury, which occurred on Dec. 28 against the Sacramento Kings.

The Warriors staff said the bruise would take about four weeks to heal, but Curry plans on playing through the pain. The team has said he is not risking further injury.

As for Messi, he and Curry have mutual respect for each other.

Curry has complimented the four-time Ballon d'Or winner's creativity, while Messi is the proud owner of a number 30 Warriors jersey.

"We both have a creative style, a feel when you are out on the pitch or the court," Curry said in November. "I love watching him play. I'm a big fan, and he's the guy you watch play because you never know what he is going to do at any particular moment."