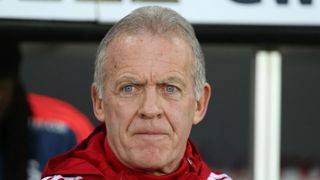 Alan Curtis has called on Swansea City to speed up their search for a new manager.

The Welsh club, who parted company with Garry Monk this month following a 3-0 home defeat to Leicester City, are third bottom in the Premier League - two points adrift of safety.

Curtis has been in charge for the last two games, overseeing a dramatic 2-1 defeat to Manchester City and a 0-0 draw with West Ham.

Former Chelsea manager Roberto Di Matteo is the current favourite to take over at the Liberty Stadium, while Marcelo Bielsa, Gus Poyet and Sheffield Wednesday manager Carlos Carvalhal have also been linked with the job.

Carvalhal has dismissed the speculation and caretaker boss Curtis said: "There's no real news. I spoke to the chairman briefly and it's an ongoing process. But like I have said previously it is important they find the right man.

"I'm quite happy to carry on, but I think it is important we appoint someone sooner rather than later.

"We are all prepared to do what it takes to ensure the club continues to improve on the field."