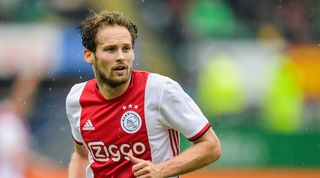 Former Manchester United defender Daley Blind says he is “not happy” to witness his old club’s struggles this season.

The versatile defender made 141 appearances for the Red Devils in all competitions, winning the FA Cup under Van Gaal and a League Cup and Europa League during Jose Mourinho’s time in charge.

However, Blind was unable to help United win their first Premier League title of the post-Alex Ferguson era, an objective they appear as far away as ever from following a disappointing start to the 2019/20 campaign.

United are currently just two points above the relegation zone after recording just two victories in their first nine matches of the Premier League season.

And Blind admits that he is not enjoying his former employers' struggles.

“Of course I'm not happy to see Man United and how they're performing at the moment,” he said. “I'm still a fan of United and it's not nice to see.”

The Dutchman also gave his verdict on fellow Premier League side Chelsea, who Ajax face in the Champions League on Wednesday, and singled out Blues striker Tammy Abraham for special praise.

“Regarding Chelsea, they are doing well, they have a good philosophy under a manager who wants to play out from the back. They play different attacking football with a lot of youngsters and that's nice to see.

“From that perspective, it's good. But if you're talking about United then I'm not happy about that, of course.

“[Abraham] is doing very well at the moment; he’s a big striker [and has] scored a lot of goals. But I will take care of myself like I always do and we have to prepare as we always do – not just against the striker but also the whole team.

“We attack as a team and we defend as a team. I think that’s the most important thing.”