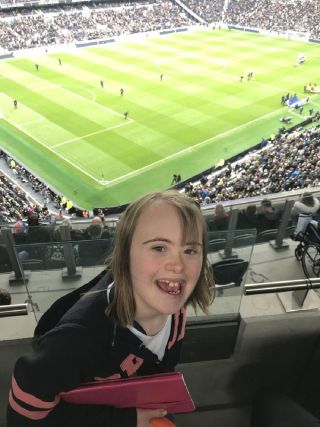 A girl with Down syndrome has received an invitation from Harry Kane to be a Tottenham mascot after a video of her dancing was targeted by online trolls.

Ella Markham, 16, was videoed by her father dancing during Spurs’ 1-0 home loss to West Ham on Saturday.

It was her first visit to the new Tottenham stadium and her dad Neil, a 43-year-old sales director from Banbury, was excited to see how she would react to the live musicians the club have organised on the concourse.

“I knew she would enjoy that, she loves live music,” Neil told the Press Association. “On her iPad she’s singing and dancing all the time.”

He posted the video online and thought little of it until he returned home and discovered he had received considerably more notifications than usual.

To his dismay, he discovered not all of the attention was positive – the video had been targeted by trolls who were making fun of his daughter.

I posted a video of my daughter enjoying herself….since then she has been a figure of fun and ridicule to some…..not what I joined Twitter for. Maybe it’s not for me pic.twitter.com/haTZ7P9yF9— Neil Markham (@NeilMarkham1) April 27, 2019

“It was absolutely horrible,” Neil said. “Say what you like about me, but not her. It was quite sickening.”

Neil waited until the rest of the family – Ella, his wife Adele and younger son Danny – had gone to bed, then went through some of the messages.

“I felt like I was on my own in the world actually,” he said.

Neil decided to confront some of the trolls directly and even handed out his personal number to a couple of them hoping he could explain to them over the phone the hurt their words had caused, but nothing positive came of it.

The only person who called hurled more abuse before hanging up.

In the end, he posted a picture of himself and his daughter to Twitter, writing: “This is Ella. Im not asking you to say how beautiful she is or for you to like the post. All I really want after tonight is to treat her as a normal person who would smile at you and doesn’t deserve to have have fun poked at her”

This is Ella. Im not asking you to say how beautiful she is or for you to like the post. All I really want after tonight is to treat her as a normal person who would smile at you and doesn’t deserve to have have fun poked at her pic.twitter.com/fnGq9V5elH— Neil Markham (@NeilMarkham1) April 27, 2019

Messages of support poured in for both Neil and Ella from all over the football world and beyond.

One Hammers supporter wrote: “As a West Ham fan the only thing to top the result is this video!! Shes AMAZING!! Rivalries and banter aside this is what i wanna see at football games.”

A Tottenham fan wrote: “Only just seen the video of her dancing. Such joy from her, she a beautiful little girl and I hope we see her at Spurs again dancing.”

The tweet also caught the eye of two former Tottenham players, Graham Roberts and Micky Hazard, who brought the incident to the attention of the club.

A representative from the club got in touch with Neil and asked if there was anything they could do to make the situation better.

“I was really impressed with how seriously they took it,” said Neil.

A slew of media attention followed, including an appearance on This Morning, during which hosts Phillip Schofield and Holly Willoughby promised to take Ella to an X Factor recording after she said her dream was to be a judge on the show.

A huge thanks to every single person that works on ⁦@thismorning⁩ for everything you did for us. Wonderful caring people. ⁦⁦⁦@hollywills⁩ & ⁦@Schofe⁩ too you made Ella feel very special. She’s had a great day and will never forget it pic.twitter.com/5QyZhb2Uc7— Neil Markham (@NeilMarkham1) May 1, 2019

As they returned home from one media appearance in London, Neil received a video message via WhatsApp from Tottenham captain Harry Kane.

“Hi Ella, I hope you’re well,” the England striker said. “I’ve seen the video of you dancing at the Spurs game. I just want to thank you for your amazing support, I loved it.

“We know your family are proud of you as well. We know you’re a big fan, we’d love for you to come down and be the mascot for the last game of the season against Everton.

“I hope to see you there. Keep dancing, keep doing what you’re doing, lots of love.”

Harry Kane has kindly invited 16-year old Ella Markham to be the mascot at our last game of the season against Everton.— Lilywhite Spurs (@Lilywhite_Spurs) May 1, 2019

Neil described receiving the video as “astonishing” and said that his daughter’s reaction to the clip was a highlight of a rollercoaster week.

He said: “It was like a film with a sharp intake of breath, hand over her mouth, ‘oh wow’. It was like a happy ending from a film.”

Now, the whole family will attend Tottenham’s final league match of the season and see Ella meeting some of her heroes.

“Harry Kane and Dele Alli are her favourites,” Neil said.

Neil said he was “mentally drained” after six days of “highs and lows and nothing else” but he was grateful for all the support his family has received.

As an Arsenal fan, this is the first time I have cheered anyone wearing a Spurs shirt. Go Ella! 👏👏 https://t.co/y6GPvNyrvn— Piers Morgan (@piersmorgan) May 2, 2019

“I’ve had over 25,000 positive messages and I bet there are thousands I haven’t seen on other platforms,” he said. “A huge thank you to anyone who said something.

“Without their support Ella wouldn’t be getting the treat she is now.

“Maybe the world isn’t the horrible place I thought it was on Saturday night.”